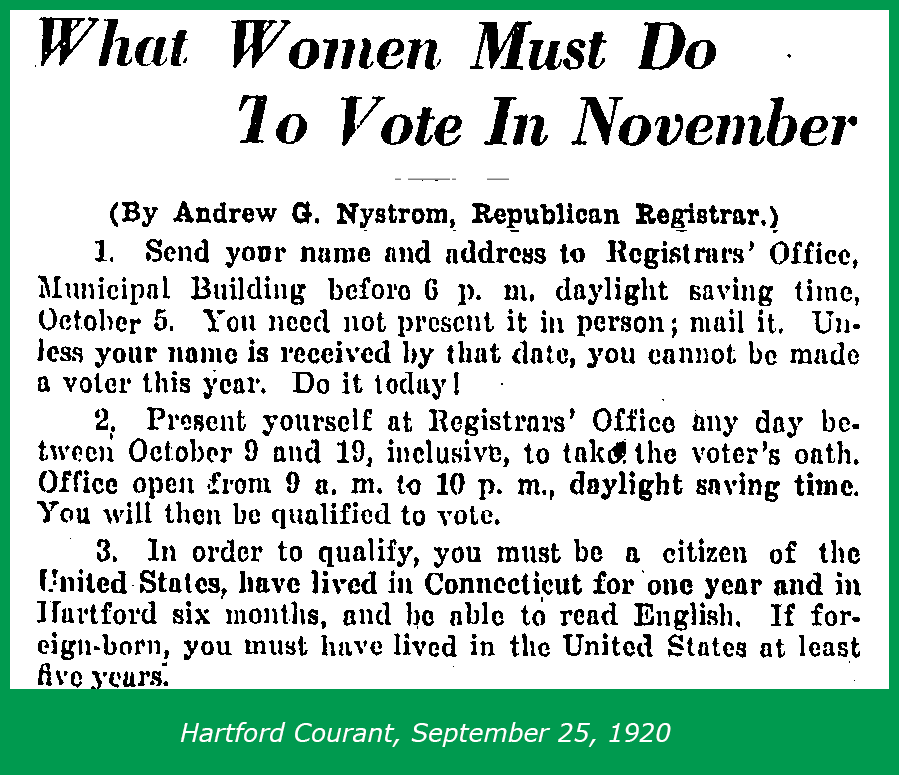 The colors on this map indicate the City's 10 wards, or voting districts, in 1920. Cards created in 1920, and not altered in the following years, have a number between 1 and 10 in the upper right corner, indicating their ward. (Click the map to enlarge) 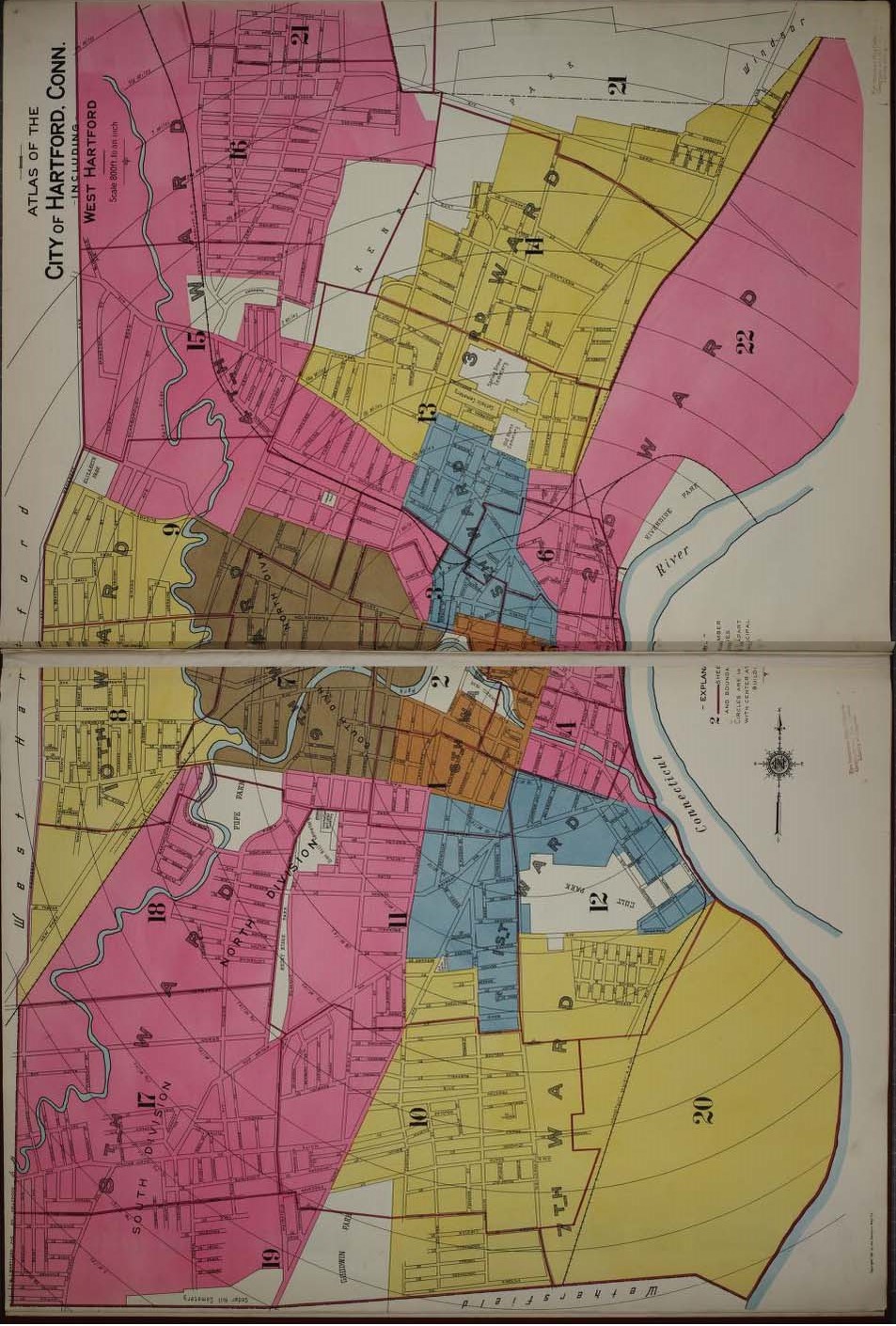 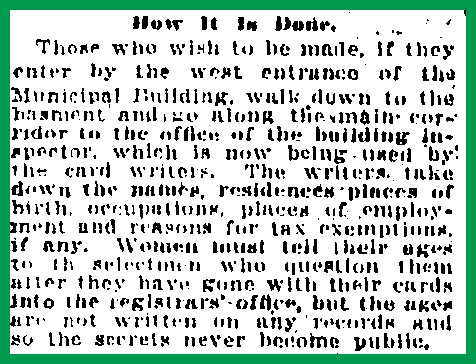 "Those who wish to be made, if they enter by the west entrance of the Municipal Building walk down to the basement and go along the main corridor to the office of the building inspector, which is now being used by the card writers. The writers take down the names, residences, places of birth, occupations, places of employment and reasons for tax exemptions, if any. Women must tell their ages to the selectmen who question them after they have gone with their cards into the registrars' office, but the ages are not written on any records and so the secrets never become public."

Registration Record for Hartford, With 1,010 New Voters in One Day, Hartford Courant, October 10, 1920

Voter Registration
Voter registration in 1920 was a multi-step process. Women and men first had to apply to be "made a voter." Individuals could send in applications, but this was also facilitated by the city's Democratic and Republican committees, as well as the Connecticut Woman Suffrage Association. The deadline that year was October 4, and the Registrar's Office then had five days to compile the list and have it sent out to a printer. On October 9, the doors were open for those who had applied to come take the oath. The cards were written out by the Registrar's Office staff, and therefore are not in the handwriting of the voter. Additionally, party affiliation was a separate process. 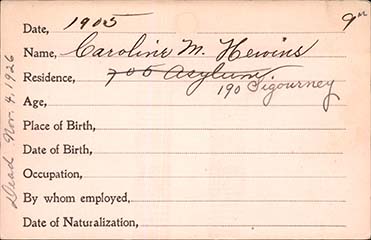 Many of the women who did the work, which made it possible for all the October 1920 registrations, had themselves registered years before. Click to learn more. 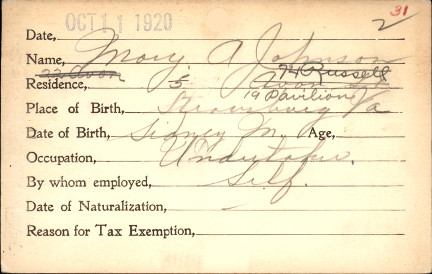 Many Black women, and their families, had begun to migrate to Hartford from the South. Click to see their cards. 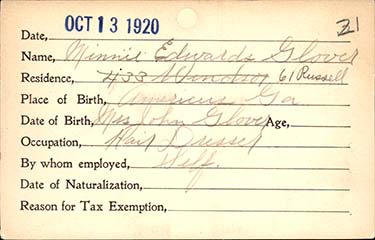 Americus, Georgia, and the surrounding area as the birthplace of many recent migrants. Click to see their cards. 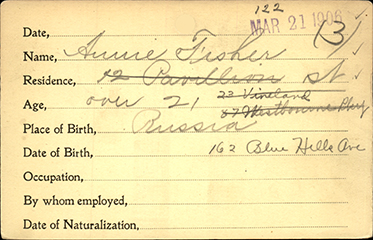 Following in the footsteps of German Jews, Russian and East European Jews migrated to Hartford to escape persecution in their homeland. Click to see their cards. 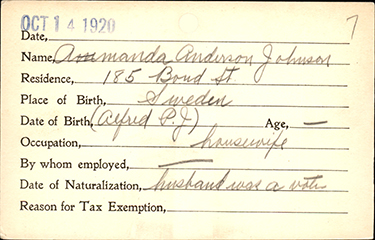 Many Swedes migrated to Hartford, many settling in the Frog Hollow neighborhood. Click to see their cards. 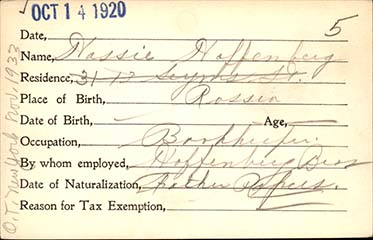 Click to view family groups we found while going through the voter registration cards.

Use the arrows on the side to page through this sample of cards. 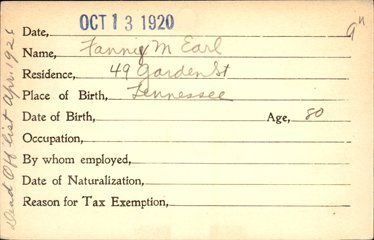 Fannie was born in Tennessee in 1840 to Col. Seth Clark Earl and Deborah Earl. In the 1860 census they are listed as residents of Illinois, and Fannie's occupation is Librarian. Beginning with the 1880 census, Fannie is living in Hartford, and is listed as the Secretary and Treasurer of Insurance Journal. Per the 1910 and 1920 censuses, she was sharing a home with Antoinette Webster, a widow. 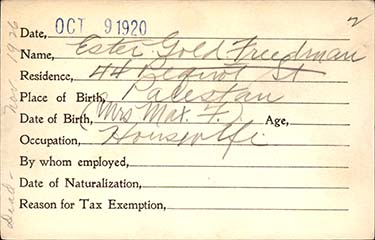 Esther Gold Freedman lists her birthplace as Palestine. Later census data lists her as either a native of Turkey or Russia. Discrepancies such as this are common when conducting genealogical research. Regardless, her parents were considered Russian, and she spoke Yiddish. Esther arrived in the United States in 1908, and married Max Freedman, who had been here since 1897. By 1920 the couple had four sons. Esther died in 1926 at age 42, and is buried in the Hartford Free Burial Association cemetery. 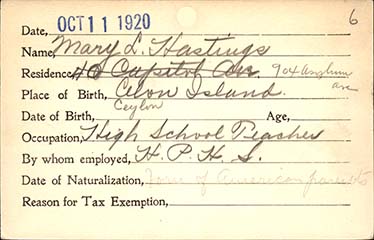 Today, being born abroad to citizens of this country, regardless of their gender, automatically grants a person American citizenship. In 1920, though, a child acquired the citizenship of their father. Such was the case for Mary L. Hastings, born in present-day Sri Lanka. 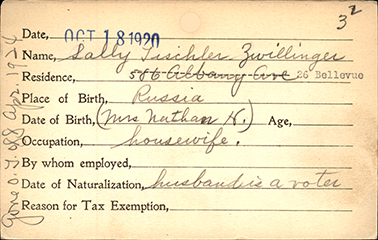 Date of Birth and Date of Naturalization

Fannie Earl, with her age written on the card, was the exception. Most women either had no information on that line or, as was the case with Sally Zwillinger (alphabetically the last woman on the list of October 1920 registrants), had the name of her husband. Similarly, in 1920, a woman's immigration status was tied to that of her closest male relative - either her father (even if he had passed away) or her husband. 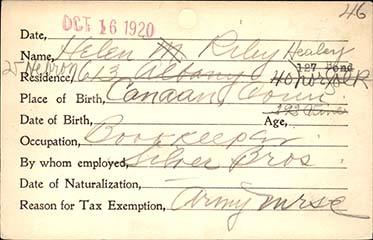 Many of the voter registration cards for men listed their military service as a reason for a tax exemption. While this was uncommon for women, Helen M. Riley Healey, a Bookkeeper in 1920, does list service as an Army Nurse. 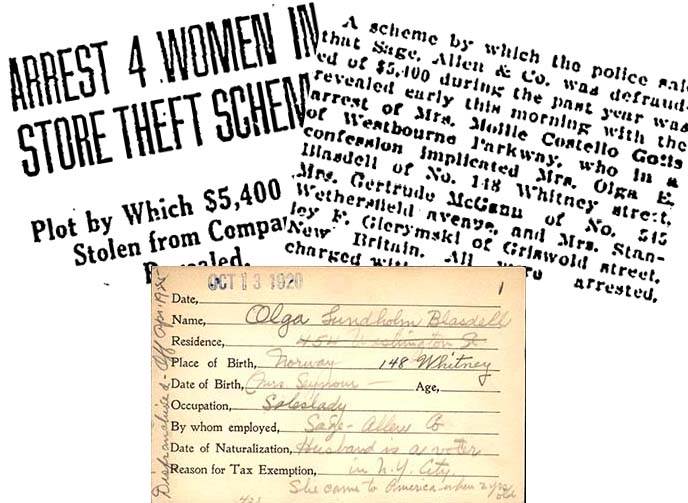 The right to vote can also be lost. Olga Lundholm Blasdell came to this country from Norway at age 2. When she registered to vote, she was a saleslady at Sage Allen. In 1925, following arrest for theft, Mrs. Blasdell was disenfranchised. A later article in the Hartford Courant states she later moved to New York and was working in Brooklyn. 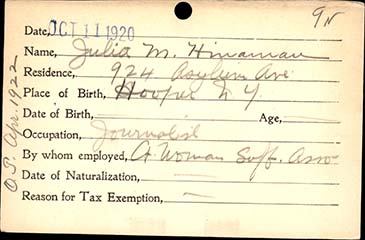 Julia was a journalist, and was living at the home of Mary Bulkley, Hartford District Supervisor for the CTWA. After the 1920 election, Julia moved to Washington, DC, to work for the newly formed National League of Women Voters. She later returned to Hartford, and started her own business doing publicity for non-profit organizations. She died in 1927, a week after having appendix surgery. 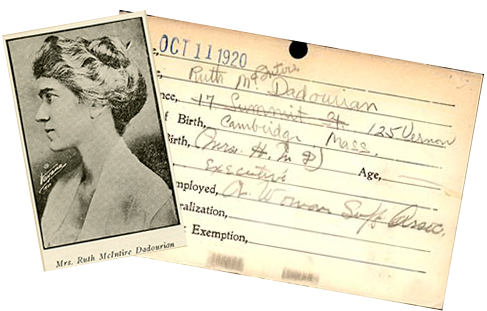 Ruth McIntire Dadourian was a suffragette from her days as a Radcliffe undergraduate. She helped plan the strategy to get the 19th amendment passed in Connecticut, and it was a disappointment to her that Tennessee ratified before our state. Ruth later served as the Director of the Connecticut League of Women Voters, as well as its President and legislative representative. She championed rights of children. Through the years Ruth remained active in local politics, and advocated for Hartford's change to the council-manager form of government.  Ruth passed away in 1983 at age 91. 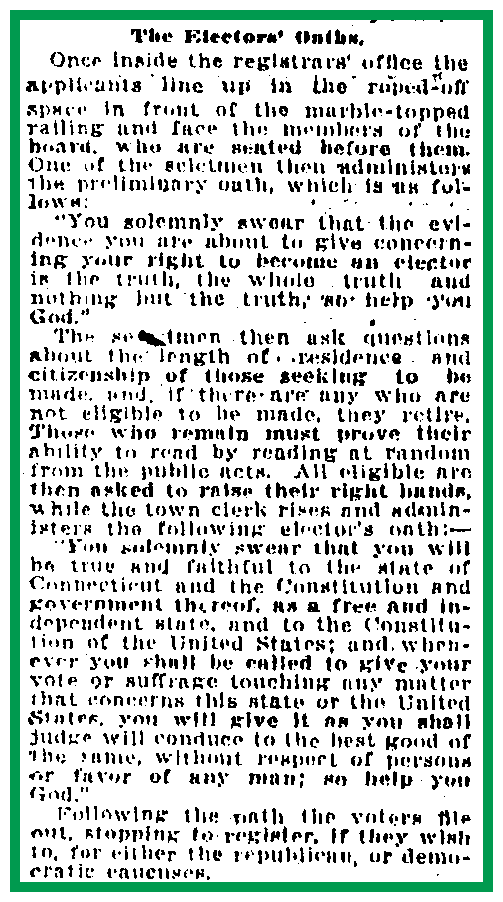 Preliminary oath: "You solemnly swear that the evidence you are about to give concerning your right to become an elector is the truth, the whole truth and nothing but the truth, so help you God."

"Those who remain must prove their ability to read by reading at random from the public acts. All eligible are then asked to raise their right hands, while the town clerk rises and administers the following elector's oath:--

"You solemnly swear that you will be true and faithful to the state of Connecticut and the Constitution and government thereof, as a free and independent state, and to the Constitution of the United States; and whenever you shall be called to give your vote or suffrage touching any matter that concerns this state or the United States, you will give it as you shall judge will conduce to the best good of the same, without respect of persons or favor of any man; so help you God."

Registration Record for Hartford, With 1,010 New Voters in One Day, Hartford Courant, October 10, 1920